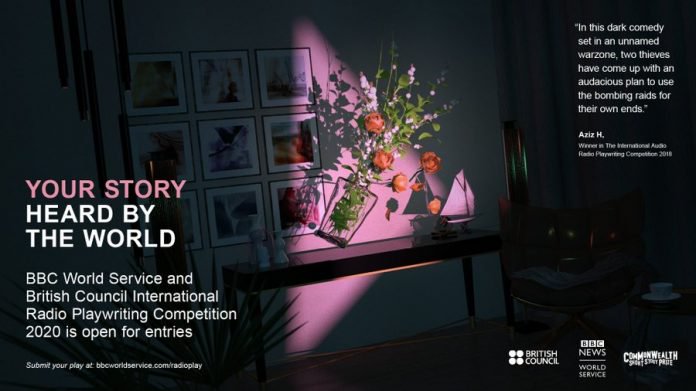 Are you a promising writer living outside the UK? Would you like to have your story heard by the world? You’re invited to submit your scripts for the 27th International Radio Playwriting Competition.

The International Radio Playwriting Competition, hosted by BBC World Service and the British Council, offers the unique opportunity for playwrights to have their radio play heard across the world by the BBC World Service’s millions of listeners.

Whether you’re an established or a completely new writer, the competition welcomes scripts from anyone outside of the UK. The radio dramas can be on any subject you like, as long as they are 53 minutes long.

This year the two first prizes can come from either the English as a First Language or the English as a Second Language category. Both winners will receive a cash prize of £2,500 sterling, travel to London to attend an award ceremony, and see their plays recorded before they’re broadcast on the BBC World Service.

Entry to the International Radio Playwriting Competition 2020 is open to anyone over the age of 18 (as of 31 January 2020), who is not normally a resident of the United Kingdom. Both new and established writers are encouraged to apply.

Entry is only open to anyone who is over the age of 18 as at 31 January 2020 who is not normally a resident of the United Kingdom of Great Britain and Northern Ireland, Channel Islands or Isle of Man (“UK”).

Entrants should write a radio play of approximately 53 minutes’ length on any subject of their choice. The play must be written substantially or entirely in English. Your script should be accompanied by a short synopsis, of no more than 400 words, which outlines the complete story of the play. You can apply by the following methods:

In order for your entry to be accepted it must be accompanied by a completed copy of the entry form which can be downloaded here.

Read all the information about how to apply before submitting an application.

LET OUR EXPERTS APPLY FOR YOU DIRECTLY AND PROFESSIONALLY. CLICK HERE TO CONTINUE!!!

This is your chance to get creative. This competition builds on the World Bank Group’s recent reports. Realizing the Future of Learning and Reimagining Human Connections.

As a young graduate employed in the Risk Advisory Academy, you will be upskilled to serve clients with distinction so that we continue to be entrenched as the strongest and most valued brand amongst our competitors. Our professionals need to have the acumen to handle complex situations and multiple responsibilities simultaneously, balancing long-term projects with the urgency of immediate operational demands. We are committed to establishing and empowering the firm by creating an environment of continuous learning and enriching career opportunities.

The World Food Prize is awarded for a specific, exceptionally significant, individual achievement that advances human development with a demonstrable increase in the quantity, quality, availability of, or access to food through creative interventions at any point within the full scope of the food system.

The AIMS Structured Master’s Program runs over three semesters. The requisite skills phase of the AIMS course builds a standard core set of problem-solving skills: estimation, computation, approximation, modelling, data analysis and statistics. The elective review phase allows students to apply these skills in some of the most exciting areas of science.

The IsDB Scholarship Programme is more than just a scholarship programme in the traditional sense of a straight financial assistance to the outstanding and qualified students. It is also a tool for the improvement of the socio-economic conditions of the Member Countries and Muslim communities.It is basically a scholarship programme and a development programme at the same time, since the scholarship is given as an interest-free-loan (Qard Hasan) to the students and as a grant to their communities /countries to which they belong.

Jobs and Scholarships Daily Updates was established with the purpose of assisting Africans achieve their full potentials by seizing the latest opportunities around the world! This platform was launched in August, 2019 and has influenced millions of lives positively in Sub-Saharan Africa. It is proudly managed by Olastep Networks.
Contact us: admin@jobsandschools.com
© Proudly Managed by Olastep Networks
MORE STORIES